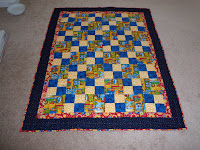 This quilt is going in the mail today to New York City, where it will be given to a family that used to be homeless, but now has regained a home... I hope some kid snuggles under it and feels safe and secure.

Victoria at Bumble Beans http://www.bumblebeansinc.com is organizing a Quilt Gathering for the organization called BASICS. BASICS helps those families get off the street to safe housing, and then helps them with the basic furnishings and 'stuff' they need. They 'need' bedding, and what better than a quilt made with love in every stitch.

The reason to donate a quilt? Cause we are the very-generous nation of quilters, and we love to give of our stashes and our skills for people in need.

And, Victoria has arranged for us to WIN STUFF along the way to the goal of 200 quilts -fabric, longarm quilting services, and a new sewing machine!

Here's the link to all the information: http://bumblebeansbasics.com/

IT FEELS SOOO GOOD TO SEND A QUILT TO THIS WONDERFUL GROUP. 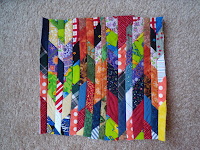 This 'little bit' is about 7 inches square, and I am just fascinated with it. I was making string blocks, which are on the diagonals, and was ending up with a trim of about an inch, so started setting aside the trim parts, and then just sewed them together randomly..

I rather like it.. haven't a clue what to do with it. Perhaps I'll just make some more like it so it won't be lonely... and then I will see. 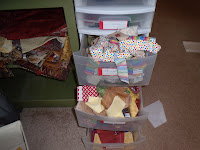 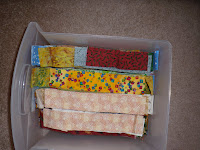 now for the rest of the sewing room.....

Posted by Kathleen at 3:24 PM No comments: 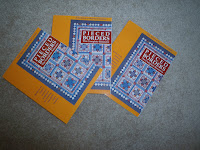 Now, I ask you:
HOW MANY COPIES OF THIS GREAT BOOK DO I NEED?
obviously, at some point I thought I needed THREE of them...
Well, it's a great book - "Pieced Borders"by Judy Martin and Marsha McCloskey...But I do think one copy will do fine for me, and I've been cleaning up...

SO I AM GIVING AWAY TWO COPIES to two people. Just leave a comment below, and I will pick the two winners using the magical random number generator...Be sure to comment in a way that I can contact you (not anonymously).

Deadline to comment is June 30.. Winner will be notified on July 1.

Happy quilting to all,

A Tale of Two Kitties - and Twenty-Two Cities!


The plan was to drive from New York to the North Carolina Outer Banks... where Dear Hubby and I would meet a large group of family and friends - you know, fun, sun, food, relaxation! 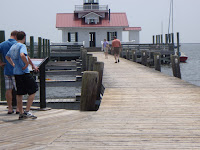 Manteo, North Carolina is the site of the first English colony in the New World - a colony that was 'lost' without trace. It's an area of great history, great sun and beaches, etc. 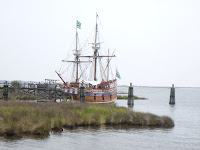 This is a replica of the ship on which those colonists journeyed from England - looks almost as cramped as our car is going to end up being - read on.........


But heartless soul that I was, I packed them up and delivered them to the tiny cage where they were to spend a torturous week, listening to barking dogs, and feeling abandoned... oh woe is me!

After a sleepless and guilty night... I SPRANG THEM !!!! I scooped them up into the car and took them with us on vacation!

UHOH- TWELVE HOUR CAR RIDE WITH TWO SICK KITTIES
UHOH - NO PET CLAUSE AT RENTAL COTTAGE.
UHOH - THERE'S NO PLACE TO PUT THE LITTER BOX EXCEPT WHERE MY FEET ARE SUPPOSED TO GO. Probably they won't use it - WRONG, and wrong, and wrong. (how many times can two cats go poo???)
TWELVE HOURS LATER - we made it - tired, hot, and a little smelly. Kitties felt terrible - they hid most of the way in a little 'cave' I made for them in the back seat that was dark and cool.
well - the week was good for us all......... 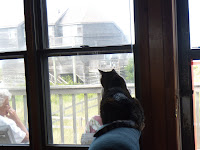 Here's how the lovely kitty Grace spent her vacation: gazing out the window at the OCEAN... wow, the OCEAN. BIG, BIG WATER. 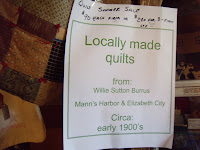 And me? Oh well, I had a blast... there was a lovely antique shop: The Sir Walter Raleigh Antique Shop... and there were QUILTS FOR SALE: 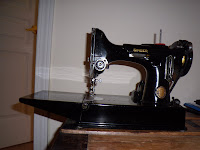 postscript: we all arrived home today - kitties are very tired, humans are very tired, but all had a wonderful week... and my lovely new toy awaits some introductory activities tomorrow!
Take care all, and happy quilting
Kate 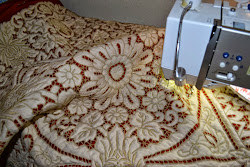